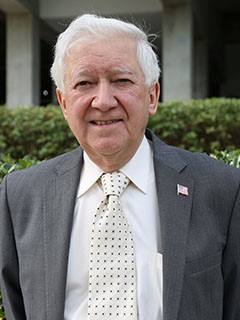 Abstract: Carbon dots (CDs) with size less than 10 nm have recently triggered great attention in the research of material science and biomedical engineering due to their unique properties such as small size, excellent photoluminescence (PL), high water-dispersity, biocompatibility, nontoxicity and abundant surface functionalities. In this presentation, I will firstly introduce diverse preparations of CDs. Extensive structural characterizations have been used to hypothesize comprehensive structural models for 3 distinct CD species that represent both top-down and bottom-up approaches in order to optimize their properties and applications.

Then, I will mainly focus on many excellent biomedical applications of the CDs recently developed in our lab: (1), in vivo experiment suggested that glucose-based CDs could cross the blood-brain barrier (BBB) due to the presence of glucose transporter proteins on the BBB; (2), a drug delivery system of carbon nitride dots conjugated with an anti-cancer therapeutic drug and a targeting molecule was capable of effective treatment against diffuse large B-cell lymphoma both in vitro and in vivo revealing efficient therapeutic capabilities with minimal toxic side effects; (3), metformin-derived CDs showed a unique nucleus targeting property, which suggests a huge potential for future nucleus-targeting drug delivery; (4), CDs have constantly shown the capability to inhibit the formation of amyloid precursor protein (APP), beta-amyloid (Aβ) and Aβ fibrils. CDs are promising nanomedicine and drug nanocarriers to treat Alzheimer’s disease (AD); (5) a pilot study showed a versatile nanocarrier could be assembled via the direct conjugation between distinct CDs to fulfill multitasks.

Dr. Leblanc has very rich experiences in materials chemistry, especially in the area of preparation of new materials and their bio applications development. He also has a strong background in physical chemistry, with a sound expertise in key research areas for this application, in particular in surface chemistry, microscopy (Brewster Angle microscopy, epi-fluorescence imaging, atomic force microscopy, and transmission electron microscopy) and spectroscopy (UV/vis, fluorescence, and infrared reflectionabsorption spectroscopy). Dr. Leblanc’s contributions to materials chemistry and surface chemistry have earned him domestic and international recognitions: In 1987, he received the University Merit Medal for excellent academic activities from University of Québec, Trois-Rivières, Québec, Canada; In 1992, he won the John-Labatt Limited Award of the Canadian Society for Chemistry for outstanding achievement in chemical research with particular emphasis on biological systems; In the same year, he was appointed as the Honorary Professor of Jilin University, Jilin, Changchun, China; In 1993, he obtained the Governor General Medal in recognition of significant contribution to compatriots, community and to Canada and there was a scholarship established in his name (for graduate students in Biophysics, University of Québec) in recognition of exceptional contribution for development of graduate studies; In 1997, he received a plaque in recognition and appreciation for contributions to the Chemistry Department as Chairman from University of Miami; In 1999, he was presented with an award for exemplary scientific advancements and department leadership by College of Arts and Sciences and Department of Chemistry at University of Miami; In 2002, he won the Provost’s Award for scholarly activity and was invited to become the honorary member of the Societe Royale des Sciences de Liege, Belgium, and the Society of Physical Chemists of Serbia for his contribution to the development of Physical Chemistry; In 2006, he got the 2006 Florida Award, American Chemical Society in recognition of the significant and meritorious achievements of prominent Florida Scientists in 2006; In 2011, Dr. Leblanc obtained Cooper Fellowship in recognition of the excellence in contributing to the core missions of scholarship, teaching and service at the College of Arts & Sciences (University of Miami); in 2014, he won the “Faculty Mentor of the Year” Award (University of Miami); in 2019, he received the “Journal of Oleo Science Impact Award” in recognition of the manuscript published in the Journal of Oleo Science most cited as a reference in other journals during the year.

The innovative work of Dr. Leblanc’s multidisciplinary team has long focused on the development of novel nanomaterials such as carbon dots. After synthesis, purification and characterization by various spectroscopies and microscopies, we are especially interested in the application of carbon dots in drug delivery to treat Alzheimer’s disease, bone mineralization process and many types of cancer. Except for drug delivery, our research group is also investigating the application of 2D or 3D printing, biosensing, photocatalysis and cosmetics using carbon dots. Another focus of our research group is the study of surface chemistry of organic and biological supramolecular complexes using Langmuir monolayer technique.

Dr. Leblanc has published 534 scientific articles in peer-reviewed journals, and he has given more than 430 presentations at medical and scientific conferences around the world. He is guest editor of Molecules. He is on the Editorial Advisory Board of several professional journals including Colloids and Surfaces B: Biointerfaces, Journal of Parkinson’s Disease and Alzheimer's Disease, Analytical and Bioanalytical Chemistry, The Open Inorganic Chemistry Journal and Recent Patents on Material Science. He is also past editor (or guest editor) of Canadian Journal of Botany, Colloids and Surfaces B: Biointerfaces, Polymers and Journal of Biological Systems.

Dr. Leblanc was a member of the International Advisory Committee (IAC) for the 15th Surfactants in Solution (SIS) Symposium (Fortaleza, Brazil, June 6-11, 2004) and Scientific and Technical Program Committee for the 13th International Symposium on Surfactants in Solution (SIS-2000) (Gainesville, FL, University of Florida, June 11-16, 2000). And he was an organizer of the Symposium on Self-Assembly and Langmuir-Blodgett Film Technology for Chemi- and Biosensors during the Southeast Regional Meeting of the American Chemical Society (SERMACS - 99) (Hyatt Regency Hotel, Knoxville, TN, October 17-20, 1999). In addition, he was the Vice Chairman of Organizing Committee for the Bionic Design International Workshop: Reconstruction of Biological Functions and Structures (Tsukuba, Japan, January 29-30, 1992).